GoPros Are NOT For Girls

I’ve never wanted a GoPro. In fact, I thought it was a waste of money. My iPhone takes great photos. Why do I need to spend $400 on a camera when I have a very capable machine already?

Oh, it’s supposed to take high quality videos while I ride my bike? I don’t think I want to watch myself crash in hi-def.

So no. I’ve passed on the whole GoPro thing. While I’ve been rationalizing why I don’t want one, my boyfriend has been religiously filming his rides. It never crossed my mind that he wasn’t “cool” enough to be filmed. Actually, I thought he was the kind of person that should use a GoPro every single ride.

But here’s the kicker: I ride significantly more than he does. Meaning I would benefit from a GoPro and actually use it more than he does. When offered the opportunity to test one out, I was initially a little hesitant, but after thinking about it, why couldn’t I “be a hero,” as GoPro often says? After extensive use, I found the GoPro helped me in a way beyond what I had initially imagined.

Learning From (& Laughing at) Mistakes 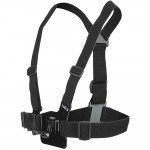 I was gearing up for my favorite mountain bike ride when I first confronted the GoPro. The chesty mount seemed like it would be easy enough to figure out, but for some reason it was frustrating me.

Why won’t it go on? OK! This is a waste of time – I hate this already!

My roommate walked in on my struggle and laughed, “Bri, you know you have it on upside down?”

She helped me readjust it with ease. The chesty mount, when it’s not on upside down, was surprisingly comfortable when it was not awkwardly fighting with my sports bra for a comfortable section of my chest. I then realized the camera had to be mounted upside down in order to work, and luckily I had already messed with the settings, and knew there was a way to make the camera film upside down. I threw my Camelbak on and rolled out the door, ready to tackle my favorite mountain.

After a bit of climbing, it was finally time to descend and start filming. I turned the camera on with a little bit of hesitation. 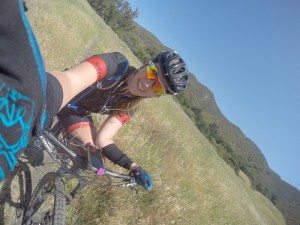 So I rode. And my ride was fun. Sure, there were a few moments where I felt a little off, but overall the ride was great and I barely noticed the GoPro was there.

After reviewing the footage, I was surprised with how intrigued I was with watching the videos of the trails. I was able to slow down and really see the trail, in a less panicky, “PICK A LINE NOW!” kind of state. I even noticed a better way down a section that I always freak out during, and laughed at my inability to see it after always riding that trail.

Yes, I actually used a GoPro, and there were benefits, contrary to my previous beliefs. I got to learn how to more efficiently ride on one of my favorite trails while also getting the joy of laughing at myself.

One of my initial concerns was that I am not cool enough to film myself. No one will want to see any of the footage and I was there, I don’t need to see my ride again.

Even though I thought I wasn’t “cool” enough, I was wrong. Every ride I go on is an adventure in some way, and there is always a magical spot where I feel at one with nature, regardless if I’m on a back road somewhere or in the middle of a trail. There is always a sweet spot and the GoPro captures it better than my iPhone ever could. As cyclists, we are able to go far and actually take in the beauty of a place at a slower pace than we normally would. Why not capture those moments when we can and embrace our own version of “being a hero?”

I guess what I’m saying is that I was wrong. The GoPro is not JUST a camera and you don’t have to jump out of an airplane every day to rationalize purchasing one. It’s a tool that helps you learn from your mistakes, following you wherever your journey may be. 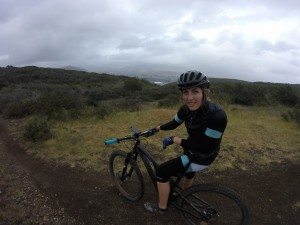 Bri Mommer is a Specialized Ambassador and genuinely awesome road cyclist and mountain biker. When she’s not on the bike tearing up the road, she’s busy finishing her English degree and moving on to a job in the cycling industry.

Get One for Yourself!

The folks at GoPro were awesome enough to provide us with the Hero 4 Silver and various mounts to test out. We’ve been putting it through its paces for the past couple of months and using it to do all kinds of cool reviews and things. We’re pretty impressed by its versatility and amazing features. In fact, you’ll be reading plenty more about the Hero 4 Silver from us in the near future. If you’re ready to grab one for your next ride, head over to GoPro’s official site to pick one up! We think you’ll be impressed too.

About SLO Cyclist 14 Articles
Sometimes we're all about collaboration.