Ahead of Interbike 2016, we got the low-down on the latest from Polar Bottle with modern colors and new size options. Fully insulated to keep your drink chilled on long rides, we tested out the new ZipStream Color Series 24 ounce bidons, which have an easy clean, removable valve design. Cool.

And we didn’t just test them. They’re also one of the first product reviews using our brand new super accurate scale. $10 on Amazon. What a steal, right? We plan to weigh pretty much everything–especially stuff that isn’t meant to be weighed. We’re doing that because we think every cyclist deserves to stress over grams. We’ve already put a box of doughnuts on it. Surprisingly light. Prepare to see this scale everywhere.

But let’s get to the review.

Colors: Six to choose from (shown above)

Made In The USA and free of BPA and Phthalates

Upsides: Easy to clean valve simply screws out of the cap to let you make sure that your bottles don’t grow anything gnarly inside of them. A super clean taste, these didn’t even smell like plastic fresh from the box, and I never once tasted chemical tainted water. The colors are pretty appealing (tested in the teal and charcoal colors), and the capacity is good for long days on the bike.

Downsides: A little too large for downtube-mounted cages on smaller frames. It wouldn’t fit on my 48cm Cervelo, but did sit fine in my larger framed Madone. Also, it’s a weird thing, but if you like to grab and drink in one swift motion, the bottle is a little stiff, so you’ll likely have to shift your grip properly to get a drink. Silly thing, but noticeable.

We tested the new colorful iterations of Polar’s lines, but the company is also releasing an ultra large capacity 42-ounce bottle. Dubbed “Big 42” and “Color Series,” the new lines launched in August at the Outdoor Retailer Summer Market trade show. Named for its 42-ounce size, Big 42 introduces the cool features, and innovative design of the best-selling Polar Bottle Sport into one of the highest fluid capacity insulated squeeze bottles on the market. 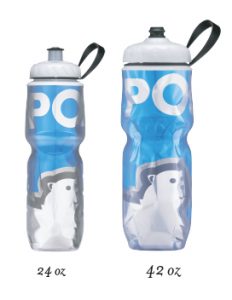 Similarly, the ZipStream Color Series transforms the look of the 24oz sport with new opaque coloring and an upgraded high flow cap. A change I think makes Polar Bottles pretty appealing to the average cyclist–plain colors match stuff. But Polar has kept what works here with their already proven design still in tact, and made easier to use with the new ZipStream valves.

Both Color Series and Big 42 will be launched starting in 2017. The lines expand Polar Bottle into new markets, which should make it easier for you to grab one at your LBS and elsewhere.

Overall, I’m diggin’ the new offerings from Polar, especially considering the high quality, made in the USA craftsmanship.

Get more info at PolarBottle.com