Today, you’re getting a serious deal: 2 reviews for the price of 1! OK, well this is actually free, so I don’t know how that math works, but get stoked. The Tigra MountCASE system I’ve been testing (thanks to the kind folks at Tigra) lets you get that heads-up display view while keeping a tight lock on your GoPro.

I was definitely anxious to try this out. I have a phone case that I’ve used for years, and like, but this set up intrigued me. Admittedly, I had some doubts about whether this mount would be stable enough as the streets here are a bit, well, rough, to say the least. Also, being the dedicated tester I am, I ran over a couple of things I usually avoid like manhole covers, water main accesses, etc. The extra stress was a serious test, and the device held firm with no real bounce or jiggle to it. Most impressive. 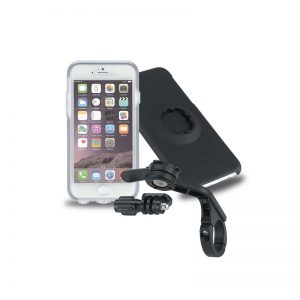 This is the mount bracket itself, which also has a POV camera attachment underneath the phone mount–a great added touch and gives an interesting angle for photos. The mount comes with the screws, as well as two shims, one of which is 25.4mm the other being 31.8mm. The Aluminum construction weighs 57g and also swivels 360 degrees, making it very versatile.

Price: $64.99 | Get more info about both products at www.tigrasport.com 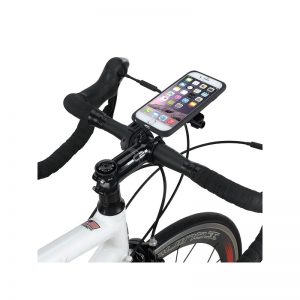 Honestly, I was very impressed with the Tigra MountCASE Bike Forward Mount and MountCASE2, and I plan to continue using them both. I liked the way that the phone display was right there in front of me, and that it didn’t take up space on the bars. A good thing to note for those of you with shorter stems as well–if yours won’t fit a full mount, heads-up is the way to go.

One minor note if you’re not riding a true road bike: I’ve been riding my CX bike, and CX bikes tend to have larger diameter handlebars, the mount itself tends to not fit on larger handlebars. A longer set of screws is an easy fix for this though. I also tried the case/mount combo on my singlespeed mountain bike, (my usual bike for morning training sessions). I had to get the mount on the skinnier part of the handlebar and then slide it up the fatter part of the handlebar to get up against the stem. So not a huge deal for pure roadies, but something to be aware of if you want to switch it between different types of bikes and bars.

The POV camera mount underneath the phone mount had a minor issue also. The provided mounting screw would not work when I had my Hero 3 in its case which was no issue because like most that own one, I have plenty of spare parts and mounts so I just used one of mine. I’m guessing but I’m fairly certain a POV with a low profile case would work with the provided mounting screw.

Read Also >>  Saddle Pain? Why a Custom Cycling Saddle Might be in Your Future

As for the water tight rain guard, it fits fairly tight which will keep the water out for sure. It takes a little bit to get broken in, but once it does it will loosen a little to make for easier phone operation. Before it’s loosened, though, it makes sliding to open the screen a bit difficult. The biometrics on my iPhone 6 Plus would not work with the rain guard on which is really a minor issue for me.

Overall, these were small things, and the ease of placement and sturdy construction mean I definitely plan to continue using both. I like the way that they work.

Get more info or get these for yourself at www.tigrasport.com