Last year, we tested and loved Wilier’s GTR SL road bike, and became coverts to the Wilier crowd. If you remember our review, you know that Wilier is dedicated to quality and overall fastness, which was evident in the quick and ultra responsive GTR SL (which is on pretty sweet discount right now, BTW).

Now, Wilier expands its unique builds to help soften the road for you with the 2018 Cento10NDR. Yes, it’s got ACTIFLEX.

Designed for cushy asphalt and rough road alike, the Cento10NDR still sticks with its race-ready heritage, but adds its innovative ACTIFLEX suspension system. Further aiding in the bike’s flexibility (har har, right?), the Cento10NDR also allows for the use of either rim or disc brakes–definitely a plus when either weight or rules dictate the use of rim brakes only. But also allowing budget-conscious racers the possibility of a one-bike-to-race-them-all scenario with a frame that allows for up to a 32mm tire.

Because we’ve seen gimmicks before on other bikes, and they maybe kinda work, the ACTIFLEX looks much more like an engineering marvel and much less like a hard marketing pitch. In other words, Wilier seems to have accomplished something truly innovative: mixing comfort with awesome.

According to Wilier, “This new ACTIFLEX technology uses a linkage behind the seat-tube to provide vibration damping and isolation from bumps. The carefully controlled suspension will be almost unnoticeable when riding, with the bike working to smooth out imperfections in the road. The ACTIFLEX system on the Cento10NDR barely moves in normal riding situations, but can flex up to 3 mm when needed.”

“The suspension can be tuned using three different weights of technopolymer insert. The technopolymer has been developed to provide consistent performance across a huge temperature range. Rather than the basic single polymers of older suspension systems, the technopolymer rubber is a combination of different synthetic compounds that counterbalance each other as the temperature changes, giving the same adsorption characteristics in temperatures from -40 Celsius to +150 Celsius. Knowing this bike would find its home on the northern European cobbles, as well as sloppy winter rides and scorching summer adventures, keeping the suspension system constant across a wide temperature range was critical.” 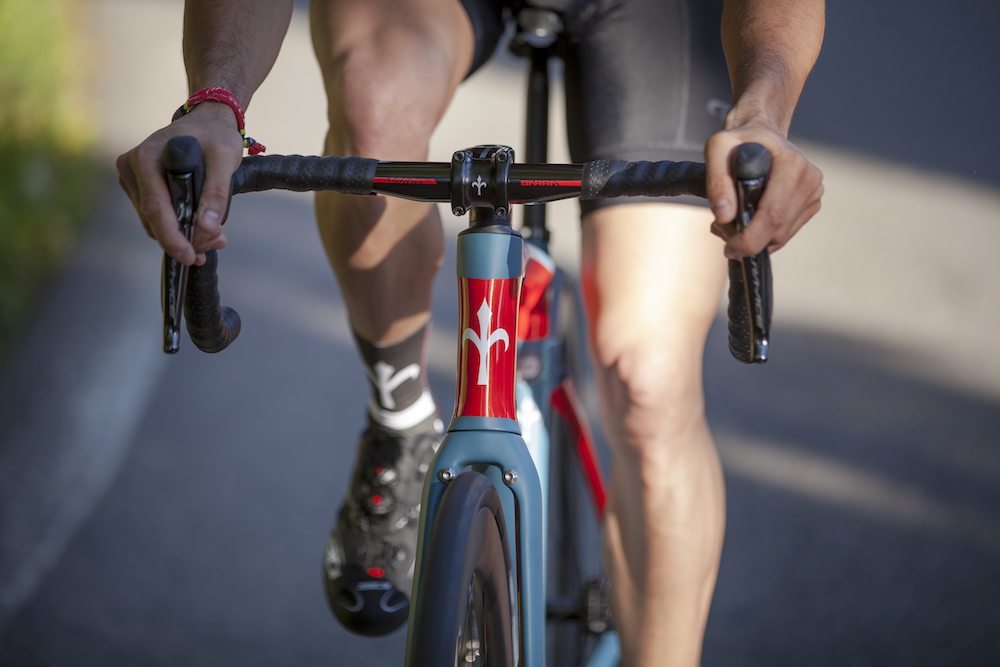 Using the natural flex of carbon chainstays, the ACTIFLEX system works with both the compression and the rebound to create a completely consistent suspension. In essence, the frame gives riders a fully balanced ride without sacrificing responsiveness.

Further, the bike’s higher stack height, eliminating the need for ugly extra spacers, as well as the shorter reach allows for better control and maneuverability over rough terrain. Clearly, steady handling, comfort, and quickness were key with the Cento10NDR designers.

While the Cento10AIR saw large weight savings over previous models, the Cento10NDR adds just 100 grams to the frame, ensuring the benefits of increased vibration damping can be gained without sacrificing the amazing feeling of riding a lightweight bike. The integration found on the Cento10AIR is also carried forward, meaning the bike can be run with absolutely no external cables. Building on the success of the Alabarda bar/stem combo, Wilier will be launching a modular system to accompany the Cento10NDR. The Wilier Barra and Stemma keeps the aero advantage of the integrated system, and also preserves the ability to run cables internally through the bar and stem, but offers up increased versatility through the ability to adjust the bar at home.