This article first appeared in our series detailing the steps to finding a comfortable saddle. We’ve put it here for easy searching, but you can check it out in all its glory at “The Most Comfortable Saddles on the Market.”

If you read through the previous articles in this series, and you’re just thinking, I don’t even know how to begin thinking about how to start picking a saddle that fits me. Good news. Meld 3D is here to save you from all that is uncomfortable.
Meld’s fully custom seats fit you exactly. Like perfectly. Like crazy perfectly awesome. It all starts with a piece of foam, your bike shorts, and you. For reals. Meld 3D employs a process that captures your exact measurements and then uploads it to their website for your modifications and personalization.
The Meld 3D saddle is completely designed by you–you sit on the foam, send it back to the company, they scan all your measurements into their site, and you order your saddle in exactly the shape/fit/graphics that will make you happiest. All this in a matter of a couple of weeks. 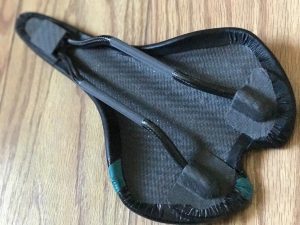 First you head to the Meld 3D website to trigger the foam block sit kit. Once that arrives, you simply wear your favorite pair of bibs (or shorts) and sit. Make certain to follow the exact directions to get an accurate impression or your seated self.

Then, you simply pack it back up and ship it off. Once Meld has your impression, they’ll upload all your specific measurements to the website. Here’s where you get to select a few specifics like shape and graphics and rails. A few weeks later, and you’ll be ready to ride.

I’m not gonna lie here, this is probably the coolest thing I’ve ever had the chance of testing. Meld has a commitment to make certain that your saddle fits you with an extended process that makes sure you’re happy with your new saddle. A completely custom saddle starts at $250 and you don’t have to go anywhere to get it fit to you. Pick your jaw off the floor. 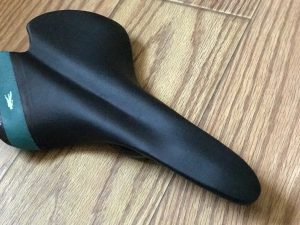 Although the finished product is a little on the rough side, you can definitely see that handmade quality to the Meld. Not a study in aesthetics, but rather a lesson in comfort crafting, the Meld saddle definitely still looks cool on my carbon machine. And the fit is, well, perfection.

The carbon shell dampens the ride while the shape of the saddle completely supports my riding style without a hint of discomfort. If you’re still feeling pain after getting a Meld saddle, make certain that it’s truly the saddle causing it, but you can definitely go back to Meld and let them know how/where/what you’re feeling. That’s serious custom.

In all honesty, I can’t recommend this saddle more. The ride quells all the old complaints from previous saddles, and this baby literally weighs 137 grams. I couldn’t be more stoked. I’m a Meld 3D fan.

Get your own saddle at the Meld website starting at $250