At Interbike, I got the chance to get up to speed with some of the newest accessories from Nite Ize. With plenty of samples from the friendly people at Nite-Ize in tow, I decided to put them to the test over a few rigorous training sessions. Here’s one of my favorite finds from the folks at Nite Ize (I also really like the Helmet Marker Plus): 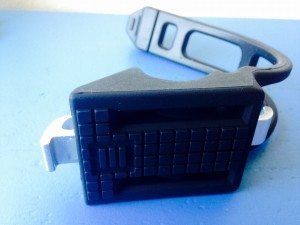 As one who’s always a little paranoid about putting my expensive phone on my handlebars and setting off for a ride, the Nite Ize Handleband caught me by surprise. This seemingly simple, stylized silicone mount fits just about anywhere on your bike. Strap it to the stem, top tube (although it didn’t quite make it around my Cervelo’s square top tube), handlebars, seat post, and just about anywhere else–this little mount does almost everything–including open your post-ride bottle of Coca-Cola with the handy-dandy-built-in bottle opener. For you triathletes out there, It also grips tightly to the handle on a jogging stroller, making it the perfect mount for a ride-run brick (assuming you’re picking your kid up mid-brick, I suppose). 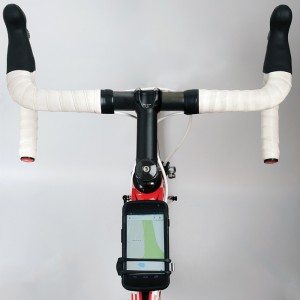 The Handleband features a single silicone band that simply wraps around itself for a very firm grasp. Just settle the curved back onto wherever you’d like it to go and pull the strap all the way around until it secures your phone and snaps into the hooked side. That’s pretty much it. Not too complicated.

Once mounted, neither the phone nor the Handleband moves. Even riding on rough asphalt, I noticed nary a jiggle in either, which is more than I can say for the old muffin-top (maybe I should cut down on the post-ride sodas). Nite Ize has performed a small miracle with this simplistic little gadget and made me trust it enough to carry my expensive phone somewhere other than my jersey pocket.

I used the Handleband with my iPhone 5, which was still inside my LifeProof case. The super firm grip on the phone took some adjusting to get right, but with a little trial and error, I figured out what works best. If you’re using an iPhone, make sure to place the overlay straps on either side of the docked apps–in other words, set the lower band just above the home button, so that you can access the unlock function as well as your other apps on the phone. You won’t lose much functionality on the phone, and it’s actually quite useful when you’re riding away the miles on the trainer and possibly need to update your blog or send a thoughtful email. I was also able to see and use my Cyclemeter app, Strava, and send texts without too much hassle. It’s merely a matter of getting the strap set at the right point for your favorite use.

Our marathon runner strapped her Samsung Galaxy phone into the band, and though it was a pretty tight fit, she was able to text and launch her apps without trouble. I should note that she was using it sans phone case, so I can’t quite tell you whether or not your phablet will rest too comfortably in the Handleband.

I did notice, while trying to get the phone set in the Handleband, that the strap fits tightly enough so that it actually lifts my LifeProof case’s screen away from the phone a bit. Although it didn’t really affect the usability of the phone, I did worry a little that it would mess with the fit against the glass after I removed it. After several uses, however, I haven’t really noticed any wear and tear to the case or phone, so it’s probably just a little OCD coming through on my part. Although folks with larger phones and/or cases may want to check the fit of the band to make sure that all is well.

Jog It Up Too

Perhaps the coolest thing about this mount is its versatility. If I must be forced to run, I want to at least be comforted by some useful gadget while I’m wheezing out the miles. The Handleband lets me strap my phone straight to the bar of my BOB jogging stroller, buckle my kid in, and listen to some tunes or watch some motivational videos on YouTube while I drag myself up and down the beach (don’t worry, I’m not watching movies while I run in the street: I hear that’s not recommended). Because I’m sure we can all agree there’s nothing like running without any distraction at all (you can take that two ways, folks).

The Handleband holds your phone like a vice, and it’s simple enough to use in a variety of places with a variety of phones–cased or uncased. At $19.99, it’s cheaper than most phone mounts on the market these days, and it doesn’t require any hassle to install or use. This is one of the few mounts that instills confidence for otherwise hesitant phone owners while still allowing for some serious versatility.

Grab One for Yourself

You can pick up a Nite Ize Handleband at their official website, your local bike shop, or via Amazon.com. If you try one out, let me know how you like it. Or maybe you’ve got another question about something not covered in my review. If so, comment below!