Here’s hoping you’re not one of those squeamish peeps who can’t handle seeing brains and stuff. Because now we know our chief editor is a total weenie when it comes to slo-mo videos of crash dummy heads getting smacked around while wearing helmets.

All heebie-jeebies aside, Kali has just released an incredibly in-depth study on helmet safety in cycling. They’ve done some serious homework and math and all to bring you greater strides in concussion and other injury prevention.

Currently, Kali’s LDL technology is available in their Tava aero road helmet as well as 3 of their mountain bike helmets: the Shiva 2.0, Shiva 2.0 Carbon, and the Interceptor.

An earlier version of LDL is also found on the Maraka RD and the Phenom, but all of Kali’s helmets will feature this technology by the year 2019.

Read on for the full details on their process and findings–direct from Kali:

At Kali we have one priority above all – we want to make anything we manufacture as safe as possible.

Where advancements in helmet safety can be made, we make them. This has been the precedent from day one – innovation was the foundation for Kali’s inception. Our core technology, Composite Fusion, was the result of over 3 years of R&D and tooling, well before we even produced our first helmet. Composite Fusion is the DNA found in all of our helmets – it allows us to make them smaller yet lighter and stronger.

How do we measure our success? By consistently implementing development strategies that address the challenges behind reducing brain injuries. We collect, analyze and share as much helmet crash performance data as possible. We do whatever it takes, using any and all available proven technologies to ensure our helmets continue to lead the way.

Linear concussions are the result of direct impacts that stop the head moving forward. Your brain, however, continues moving and collides with the interior of the skull, causing damage to either the frontal lobe or occipital lobe, or both. Rotational concussions result from lateral (oblique) impacts that spin the brain on its axis causing brain structures to tear. 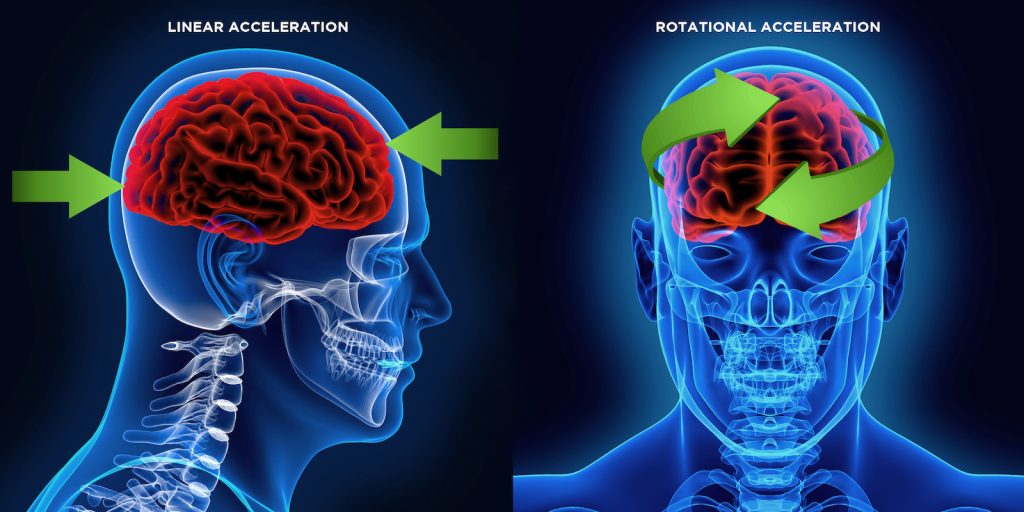 Much of what we have learned over the past decade of developing helmet technology can be reduced to one basic principle: A smaller helmet is a shorter lever on your head. If a larger helmet means a longer distance from the center of your brain to the end of the lever, then the impact area (read trail) that touches the helmet exerts greater acceleration forces on your brain.

A smaller helmet means less of a lever arm on your head requiring more force to spin your brain. A reduction in the potential for TBI and MTBI can be achieved with a reduction in linear and rotational acceleration forces on your brain when you crash. Smaller and lighter helmets with LDL rotational technology.

Linear and rotational concussions occur in both high and low G impact scenarios. Current helmet standards only account for high G linear, or catastrophic impacts. These standards mandate that the foam helmet liners that we place next to our heads need to be very hard in order to pass catastrophic level impact testing. We also know that repeated low G impacts contribute to neurodegenerative problems (brain damage), such as chronic traumatic encephalopathy (CTE).

Traditional EPS liners do not protect against brain damage at low speeds (2 – 4m/s) or brain rotation at any speed (although Composite Fusion lowers impact forces by virtue of helmet size and weight reduction – a shorter lever on your head).

Research shows that there is an 80% chance of Mild Traumatic Brain Injury at 106 G, yet the current standards require an impact force reduction to only 275 – 400 G.

Kali’s omnidirectional impact technology, LDL (Low Density Layer), is our proprietary design and implementation of a viscoelastic material made by Armourgel. Armourgel has an open cell structure that gives breathability and flexibility, absorbs and dissipates energy at high and low speeds and can take repeat impacts without any loss of performance. Below is lab footage from Armourgel showing a bone snap test using an impact anvil – with and without Armourgel. 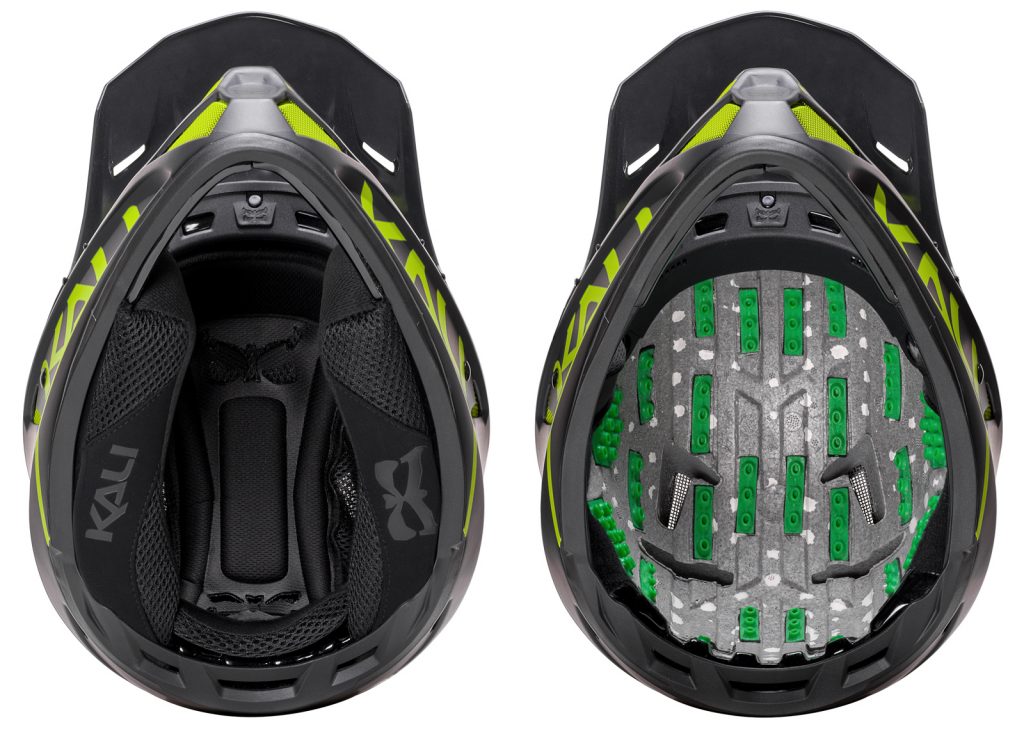 Placed between the foam liner of the helmet and the wearer’s head, LDL reduces both linear and rotational acceleration forces in both high and low G impact scenarios. LDL has multi-vector elasticity – that is, LDL responds by stretching under pressure from a variety of different directions and force levels. LDL strips are distributed throughout the helmet to ensure maximum airflow and comfort, however, their primary function is to react to linear and rotational acceleration from multiple vectors. 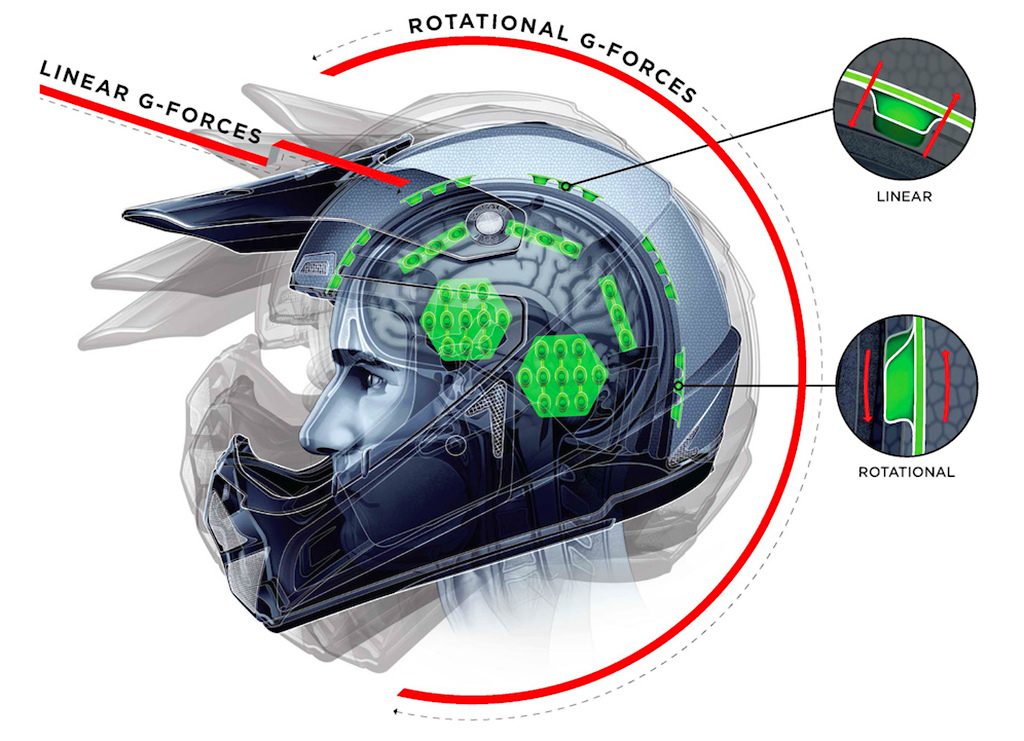 Armourgel started testing Kali’s Shiva full face with and without LDL in rotational impact lab conditions in 2014. Shivas without LDL were Reference helmets, and Shivas equipped with LDL were classed as Advanced Liners. A guided falling mass with a 30° impact wedge was used to test up to 10 m/s. 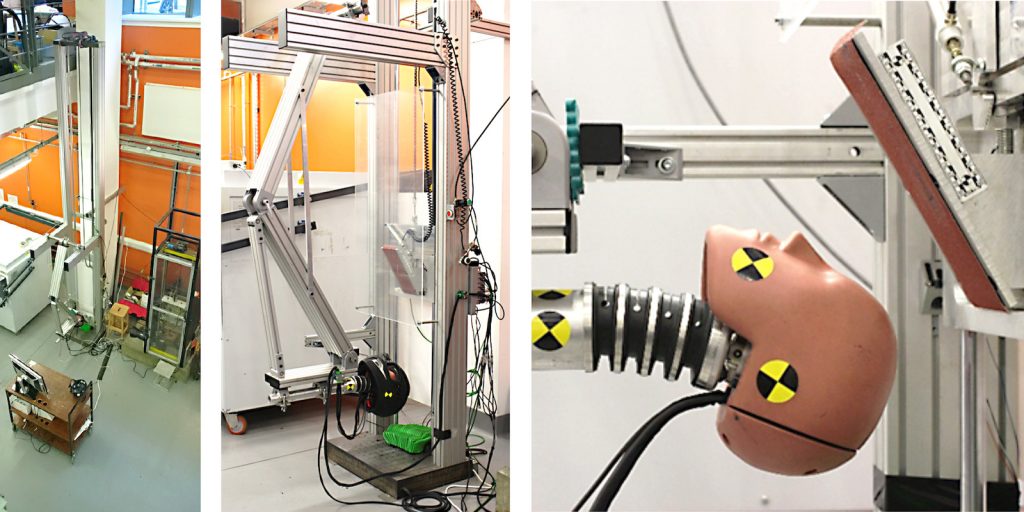 A cantilevered mass was built to mimic the effect of a body mass, and an instrumented Hybrid III head form was attached to the body mass. The use of high-speed video enables correlation of head form kinematics with helmet position. 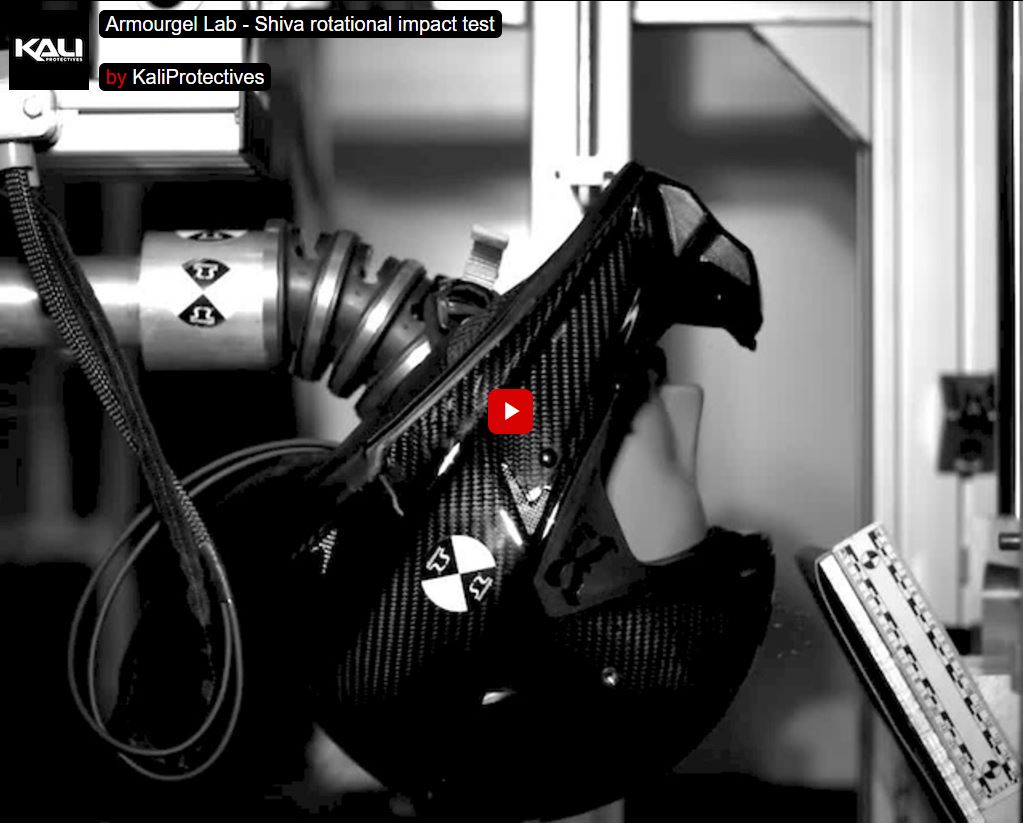 Nicholi Rogatkin’s legendary 2015 Red Bull Rampage run has to be seen to be believed. The fact that he rode away is a testament to his athleticism and a very healthy dose of luck. Rogatkin was the first Kali rider to run a Shiva with LDL, a resultant prototype from the 2014 Armourgel rotational LDL tests. Our CEO and lead engineer Brad Waldron glued the strips into Nicholi’s Shiva by hand a couple of months before Rampage.

Armourgel reconstructed Rogatkin’s crash in their test facility, replicating it as accurately as possible, and then compared his real world crash data with the 2014 Shiva LDL oblique impact findings. Thanks to their lab techs, we now have 2 sets of oblique impact data to compare: the pre-crash Shiva LDL test data, and the dataset from the reconstruction of Rogatkin’s crash. 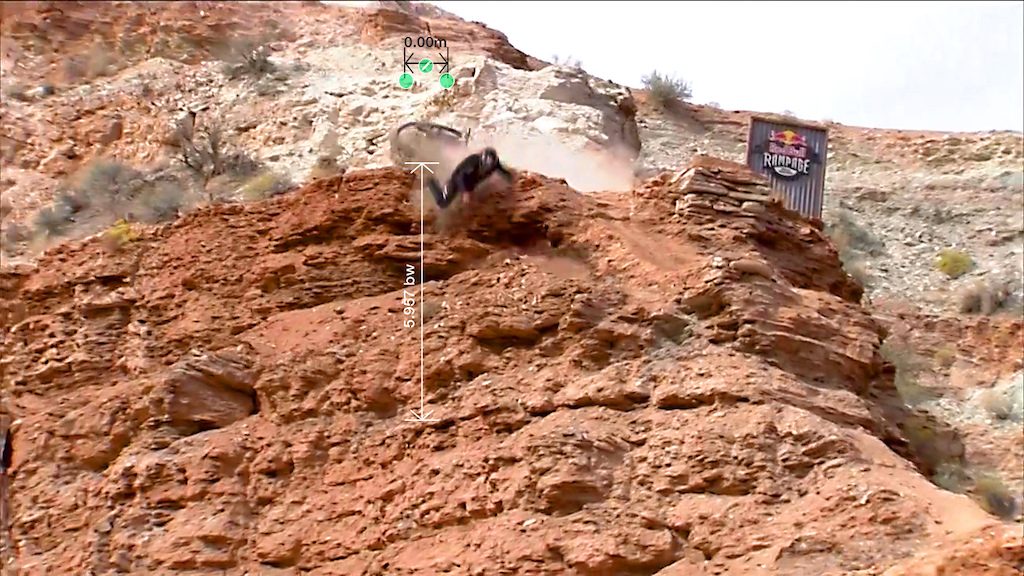 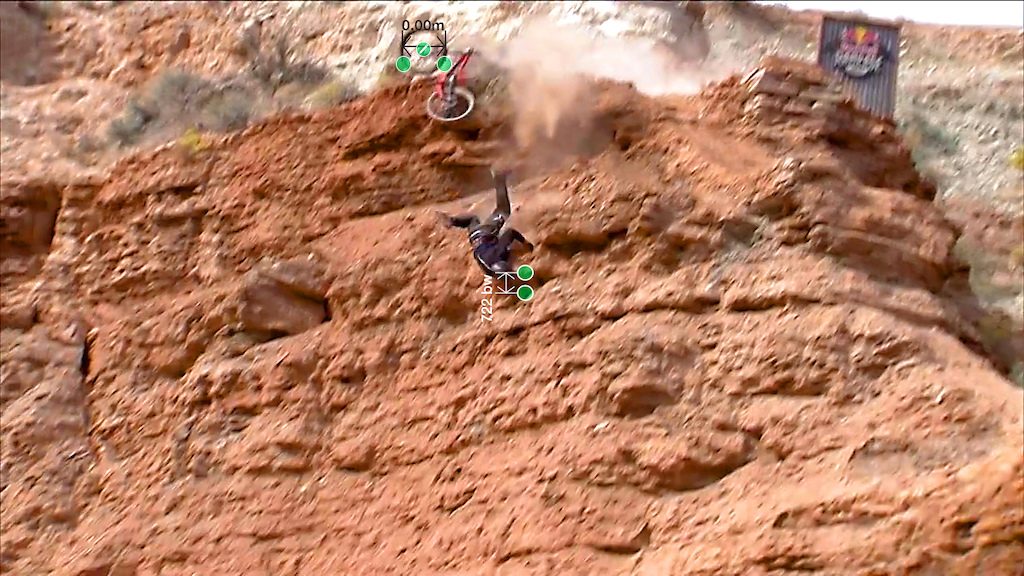 The crash data was used to create a controlled impact test that measured both linear and rotational acceleration. Angle and position were adjusted to emulate the Rampage crash exactly. The speed was derived from video footage and screenshot analysis. All rotational testing (before and after the Rampage crash) was administered in the same lab, on the same test instruments, by the same operators. Check the math out here.

Significant results in a test lab are encouraging, and indicate that our development strategies are moving in the right direction. There is, of course, no substitute for real world evidence. Two-wheeled accidents are a reality, and although we never want anyone to actually crash, real word data is critical to making better helmets.

We are in this case very fortunate to be able to learn from Nicholi. His and other crashed helmets are invaluable contributors to evaluating Kali’s helmet performance. Acquiring accurate data is a big part a why we offer a Lifetime Crash Replacement policy. The steady stream of crashed helmets we receive are a wealth of knowledge. We want to see how they’ve held up out in the real world, and it allows us to carefully try and predict how our helmets will perform. We then adjust our engineering and development program based on what we learn. One of the raddest guys ever, Cedar Keyes, is the Kali Road Warrior. Cedar travels up and down the West Coast, providing race and event support with demo helmets, and he manages to collect crashed helmets for our test lab.

What’s next? We can say that we have compelling performance data from both LDL test lab impacts and a real world crash reconstruction. We know that LDL can actively reduce the effects of both linear and rotational acceleration. We are so confident in the effectiveness of LDL that it will come as standard equipment in Kali helmets as of 2019.

Which Helmets Have LDL?

As I said earlier, Kali’s LDL technology is currently available in their Tava aero road helmet as well as 3 of their mountain bike helmets: the Shiva 2.0, Shiva 2.0 Carbon, and the Interceptor.

An earlier version of LDL is also found on the Maraka RD and the Phenom, but all of Kali’s helmets will feature this technology by the year 2019.

Questions? Kali has you covered. Head over to Kali Protectives to check out more on their tech innovations and road and mountain helmets.