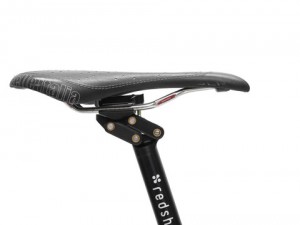 So you’ve spent plenty of money on your road bike, got a fit for road racing, and started doing some local criteriums. But suddenly you’ve caught the triathlon bug. So what do you do? Spend more money on a time-trial bike? Maybe get yourself a set of clip-on aerobars and a new seatpost to get into a proper aero position?

For those of us who like to trade between road cycling and triathlon, Redshift Sports has developed some very cool new products that will save time, save money, and put us into more aerodynamic positions. Easily.

They do this with a seat post that snaps into two different positions: one a more road-worthy setback, and another a more aerodynamic forward position. Pair this with their quick-release aerobars, and you’ve got a completely customizable cockpit built toward your passion for cycling and triathlon.

Instead of explaining how they work, it might be easier for you to see these for yourselves. We met up with Redshift at Interbike, and their fancy display caught our eyes. So, I shot some video of the Switch system in action, but I won’t subject you to my very poor video skills. Instead, here’s a link to Redshift’s professional looking videos that show off the way the system works much better than I ever could.

The Switch System not only lets you move fore and aft to find the perfect position, it can do so on-the-fly. According to the guys at Redshift if you’re tucked in your aero position, but you see a big hill coming up, you can flick the saddle backward and get more power on the climb. Then pull the saddle forward again to get back into the aerobars.

The quick-release aerobars are great for those of us who might not want to leave clip-ons on our bike all the time–letting you have access to all hand positions when you really just want to go on a hilly ride. This is super handy, especially if you’re trying to stuff your bike into your car (I speak from experience with other aerobars and a Prius). These also come in carbon versions, which are guaranteed to make you faster (OK, not really. I added in that part). 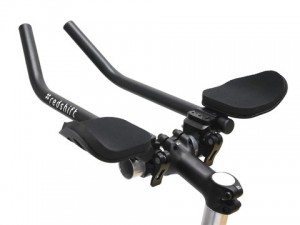 And, in case you’re wondering, the saddle position preserves proper leg extension in both positions, which means you won’t have to take time to adjust saddle height once you’ve got it dialed in to your specifications.

Oh, and if you’re worried about the seatpost shifting forward or backward when you don’t want it to, take a deep breath. We played around with the display at Interbike, and it seems pretty well locked in place unless you deliberately want to move it.

How to Get Yours

The Redshift Switch Aero System will cost you about $299. If you want to go carbon, the system is priced at $369. Not too bad, actually. You can also order each piece separately along with some cool accessories.

Check out the Redshift website to order your very own aero system, and, if you do, let me know how you like them! Hopefully we can get a set to put through its paces in the near future, and, if so, you’ll definitely hear about it.

The seatpost and aerobar system is legal in many races, but some events may not allow them. Be sure to check the rules of your event before you start setting up your gear on race-day.