Recent news stories about attacks on runners have outdoor athletes considering their approach to solo runs, rides, and hikes. Our training goals and times aren’t always compatible with safety, so what to do? Pepper sprays have long been a tool for deflecting attackers—from human to animal—and Sabre Red now has a gel formulation that allows for a targeted stream that won’t blow back and affect you.

Price: $17.99, 35 grams, with armband (tested); other sizes, from a keychain model to a “household” 13-ouncer, among others, are available. The cyclist version comes with a hook-and-loop-fastened holder that wraps around your bike’s top tube; $14.99/1.25 ounces.

Whatever is applicable and important: This version of Sabre Red can’t be shipped to Alaska, Washington DC, Hawaii, Massachusetts, and New York.

Upsides: You’ll be carrying a nonlethal deterrent that can be aimed at your attacker’s vulnerable spots and isn’t likely to be blown into your own face by the wind.

Downsides: Pepper spray of any kind isn’t foolproof; you have to be able to aim it precisely, which can be tough to do if you’re panicked. Also, not everyone is bothered by capsaicin (the hot stuff), and there’s always the small chance your attacker might be one of these people.

If you want a deterrent to attack that’s easy to carry, this is fine. But like any spray, it won’t necessary stop an attack—so practice aiming and be aware of your surroundings.

If you’re out on the trail, taking a nature break from your bike, or chasing back to your group, you could find yourself alone with a two- or four-legged critter intent on doing you harm. 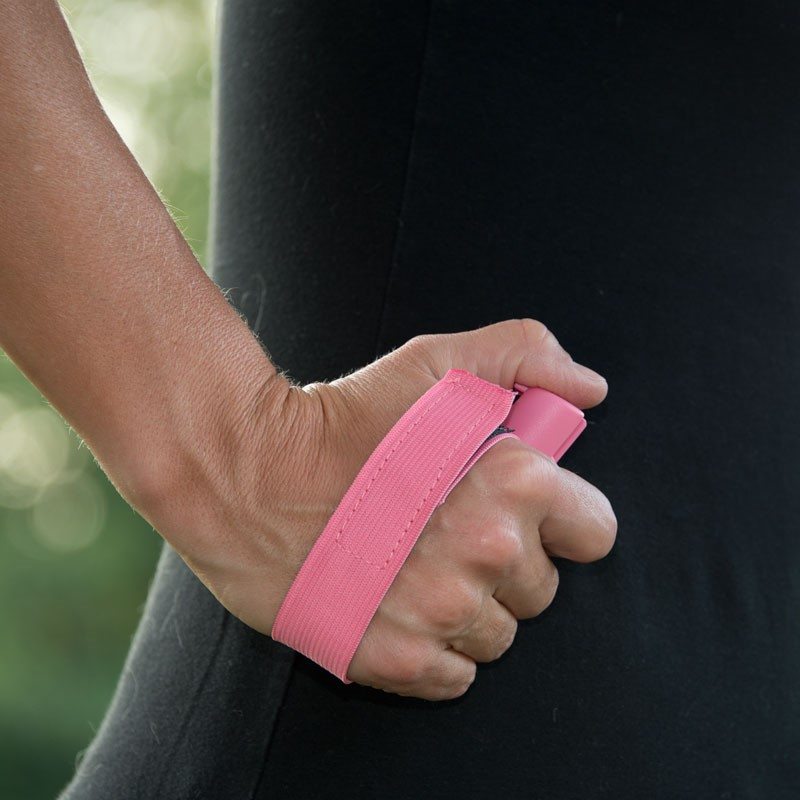 Anticipation of this kind of situation might make you consider carrying pepper spray for self-defense. As it turns out, there are various formulations of pepper spray, which create different patterns as they are dispensed from the container: cone, stream (the gel), and foam, which actually sticks to your assailant, and even different strengths. You can get hung up on exactly how hot your pepper spray is, but not all manufacturers are transparent about this (Sabre isn’t), so you can look for “police strength.” That said, Sabre’s Red formula, at “police strength” has been ranked by at least one safety website (selfdefenseninja.com) as among the best.

I was excited to spray the stuff, but I was a little worried about wind blowback and therefore spent some time scouting around my yard for a protected place. The canister fit comfortably in my hand, and the top easily swiveled into “go” position. It turns out wind wasn’t a problem. The spray comes out in a thin line, easy to direct; it’s a little bit like firing Silly String, except it never strings up—and it would certainly kill a party vibe. On the ground, it’s an orange-red spot. I poked it with my finger and felt no burn—and no, I wasn’t brave enough to put it anywhere but on my finger.

Pepper spray is a known deterrent. But—and this is a biggie—you can’t rely on it to keep you safe. The problem is time. An attack can come fast, and if you’re digging in your hydration pack or through your jersey pocket as a dog prepares to lunge, and positioning the top to the “open” position, you will lose precious seconds. Keep the canister on your handlebar, in your hand, or on an armband. If you’re taking a nature break, carry the spray with you. Another caveats: aim. If you spray and miss your target’s eyes, nose, or mouth, because of a crosswind or bad aim, you will not have stopped the attack. This gel sprays in a straight line so it’s easy to aim—if you’re not too scared to aim accurately or there are other inhibitors. One more thing to know: not everyone will be bothered by the spray, and even if they are, it takes at least five seconds for the pepper to do its painful thing. So shoot and run toward safety to maximize your getaway time.

Bottom line: Pepper spray can be a good deterrent, but don’t let it make you overconfident: things can still go wrong.

If you want to see it in action on a bike, here’s Sabre’s official video on the cycling specific version: