Long-time runner, first-time triathlete, Kalen, joins the SLO Cyclist team as one of our newest contributing writers. In her first article, she shares what she learned competing in her first sprint distance triathlon.

I’ve been running for years, and I had finally put a few half-marathons into the soles of my shoes when someone decided I should update my goals. In the middle of a ten-mile training run, a lady chased me down and told me that I should be doing triathlons. Yes, my introduction to triathlon came from a complete stranger.

I did what anyone else would do and started researching triathlons as soon as I got home. (That’s what everyone would do, right?) After finding a sprint triathlon that was 3 months away, I registered for it.

Then, I bought a bike.

I maintained my summer running schedule of 15-20 miles weekly. I added in cycling, but mostly on a trainer. I learned some very valuable lessons like the need for cycling shorts and that not all cycling shorts are created equally. I learned that bike fit is very important and your bike fitter needs to know how to best handle a person that lives with leg length discrepancies. I experienced the lesson of handling my first hill. I learned that running as soon as you get off the bike is not a thrilling experience. More on these in future installments.

A few weeks before the race, I joined a gym with a pool. I knew that this discipline would be the most difficult, but that it was the shortest of the three so I gave it the least attention. I didn’t go into this race with the intention to win. I only sought to complete it. 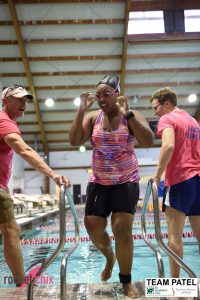 The swim portion was done in a pool as a zig-zag pattern across. Swimmers were supposed to self-seed. I went last. Turned out that there were two swimmers slower than I was, but it didn’t matter as they were out of the pool long before I was. It was hard. If it weren’t for my son, I would have quit.

The first transition was the one where you try to put dry socks on wet feet. I’m still cycling with cages so I’m wearing my running shoes. I had grand plans of putting on sunblock and body glide, but since I was last out of the pool, I felt like I should move faster and neglected to do those things. 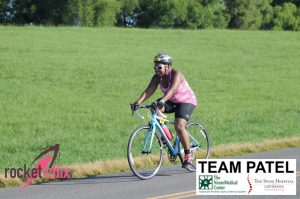 On the bike, I was able to pass people throughout the course. Many of the people I passed were participating in the fat tire division of the race, but I still didn’t count myself out. I had put in quite a bit of work both outdoors and on the trainer. The course was flat.

I learned the importance of sunglasses during the ride by seeing a dragonfly up close and personal. I needed to learn how to hydrate better during the ride, which is the downside to spending so much time on the trainer–I wasn’t comfortable riding one handed. I could’ve used some of these bike handling skills videos during training.

The second transition was quicker because I was already in my running shoes. I was losing steam as I grabbed my water bottle and I considered just calling it quits again. As soon as I came out of transition, I saw my son again. So I ran…

Now I’m training for the Olympic distance triathlon that I accidentally signed up for.