So, some of you won’t relate to this but I’m guessing others just might.

You ride/train, you have dropped some weight, your average speeds are going up, your bike handling skills seem to be getting better and all just in time for your next race. Race day, you eat a good breakfast, warm up goes well, you feel good. Lining up to start you look around and think, yeah, I’m finishing ahead of you, you, you, for sure him . . . .

Bang, race starts, sprinting from the start with the usual leg burn, lungs burn a little but not really close to red-lining. Feeling ok, but wait, racers flying by you, no response. Finally, you are alone on the trail, dropped with no hope of catching up. You try anyway, too proud to just roll off the course but, alas, second lap, third lap, getting lapped. All the while the thoughts, I felt awesome at warm-up. I know I ate just right. This sucks. On and on the torture of having that race.

That race. The one where you get pulled, earn the Lanterne Rouge, the one that gets you thinking: I think my race career is over. Maybe I just don’t have it. Maybe I never had it. Or, the worst thought of all, This just isn’t any fun. How on earth do you bounce back from this? Well, we’re gonna to explore that, hang on.

Building Resilience on the Bike 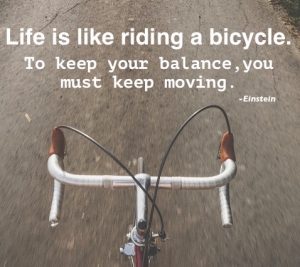 Resilience is most definitely needed for cycling. Really doesn’t matter if you race or not, there will always be days, sometimes strings of them, where you feel like crap on the bike. Sometimes you just don’t want to get back in the saddle. Resilience will get you back on the road and make it fun again.

Resilience is defined as “an ability to recover from or adjust easily to misfortune or change”–thanks Merriam-Webster. Seems like just an ability doesn’t it? I tend to think of resilience as more of a thought process myself, actually, several thought processes rolled into one.

Read Also >>  Tips to Build Mental Toughness on The Bike

First off, get out of your own head. By this, I mean, can the negative self-talk, it doesn’t help anything. Beating yourself up isn’t going to change a thing except maybe for the worse. Particularly when racing bikes, bad days happen. If it isn’t like the day described earlier, it’s mechanicals. Mechanicals are kind of easy to deal with; though, those seem beyond our control for the most part. Days like what I described earlier should be easy to avoid, right? Not really, maybe we trained too much that week, maybe it was a bit too warm, cold, humid etc. and we just don’t function well in it regardless of our fitness level. Maybe it was just the universe dishing out our serving of humble pie. Either way, we have to adjust our thought processes to be able to deal with the misfortune.

This leads to the next process: control. I know this opens a can of worms but really, we humans have very little control over anything, even ourselves if we are honest. If you can reach a point where you begin to understand our real lack of control this will help get you back in the saddle after a rough stretch. Even the pros have bad days that they can’t explain. How many times have you heard “I just didn’t have the legs today” from a pro after a race? If it happens to them it will for sure happen to you. The pros know this so they just hop back in the saddle and try again the next time. They don’t beat themselves up mentally nor delude themselves into thinking they should have been able to control the day.

Next, we have to learn how to “turn lemons into lemonade.” Yeah, I hate those corny cliches also but . . . a bad day on the bike could be a signal that change needs to happen. Maybe our training routine has gotten too mundane. Maybe, we get complacent and just pedal to be pedaling. Nothing like a bad race to make one take a look at things in a different light, which we probably should have been doing all along. It could be we had our expectations out of whack and need to get a bit more honest about where we really are in regards to fitness level, training intensity, etc. Basically, take a bad day and see what you can learn (and maybe a little retail therapy doesn’t hurt here either).

Read Also >>  Gear Every Cyclist and Triathlete Should Own

In Racing, Nothing is Personal

Next piece to resilience, don’t take it all personally. I know this can be difficult because we are usually a bit emotionally tied to ourselves, but this is essential. Most of us aren’t making a living racing a bike. Heck, some of us aren’t even making enough to pay for the bagel on the way to the race. Most of us do this for the fun, the camaraderie of folks that actually understand our obsession with the two wheeled monster, and a myriad of other reasons. Remember this folks, your racing ability, or lack thereof, doesn’t define you as a human being, it is just one small part of who you are. If we remember this, then the sting of that bad race won’t keep us down.

Amiright? No go get a ride in!